One such instrument is the High Definition Sounding System comprised of dropsondes using long-range telemetry. The instrument was developed by Yankee Environmental Systems in western Massachusetts and funded by the Navy, NOAA and a Phase 1 Small Business Innovation Research (SBIR) grant through NASA’s Ames Research Center at Moffett Field, Calif. Eight soda-can sized sondes were dispensed during flight, sending back data on pressure, temperature, humidity, winds and sea surface temperature.

Next phase of the dropsonde study will be flown in September on several NASA WB-57 flights when up to 96 sondes per flight will be automatically dispensed at high altitude. This research, which includes flights on NASA’s P-3B flying laboratory, is leading up to installation on a NASA Global Hawk for the 2014 Hurricane and Severe Storm Sentinel mission.

A second technology study flown on the DC-8 had two parts, the first of which is related to airline safety. The prime task was to demonstrate the real-time measurement of radiation on aircraft, transmit it to the ground via satellite link, incorporate the data into global radiation models and distribute it to users – all within 15 minutes. Space Environment Technologies is mapping radiation doses over Earth and at different altitudes. The company, which received real-time data during portions of the DC-8 flight, will provide a system for the commercial airline industry to monitor severe radiation from solar flares for global aviation safety.

The second part of this study was conducted by Atmospheric & Space Technology Research Associates of Boulder, Colo., producers of GPS receivers. Company instrumentation collected longitude and latitude data as the system made ionospheric, or upper atmosphere, measurements. The company is exploring whether it is feasible to measure scintillation, or GPS signal fluctuation, from an airplane. 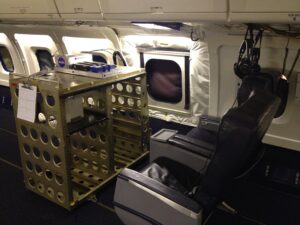