The current figures below show the NAIRAS prediction of the radiation exposure quantity related to biological risk – Effective dose rate (uSv/hr) – at several altitudes. To put the exposure rates into perspective, one chest X-ray is about 100 uSv, and a CT scan is about 8,000 uSv. 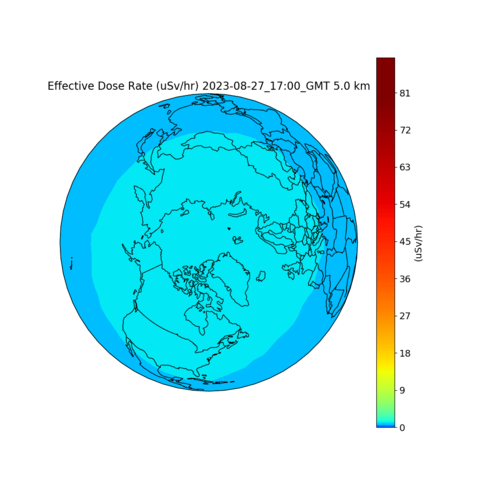 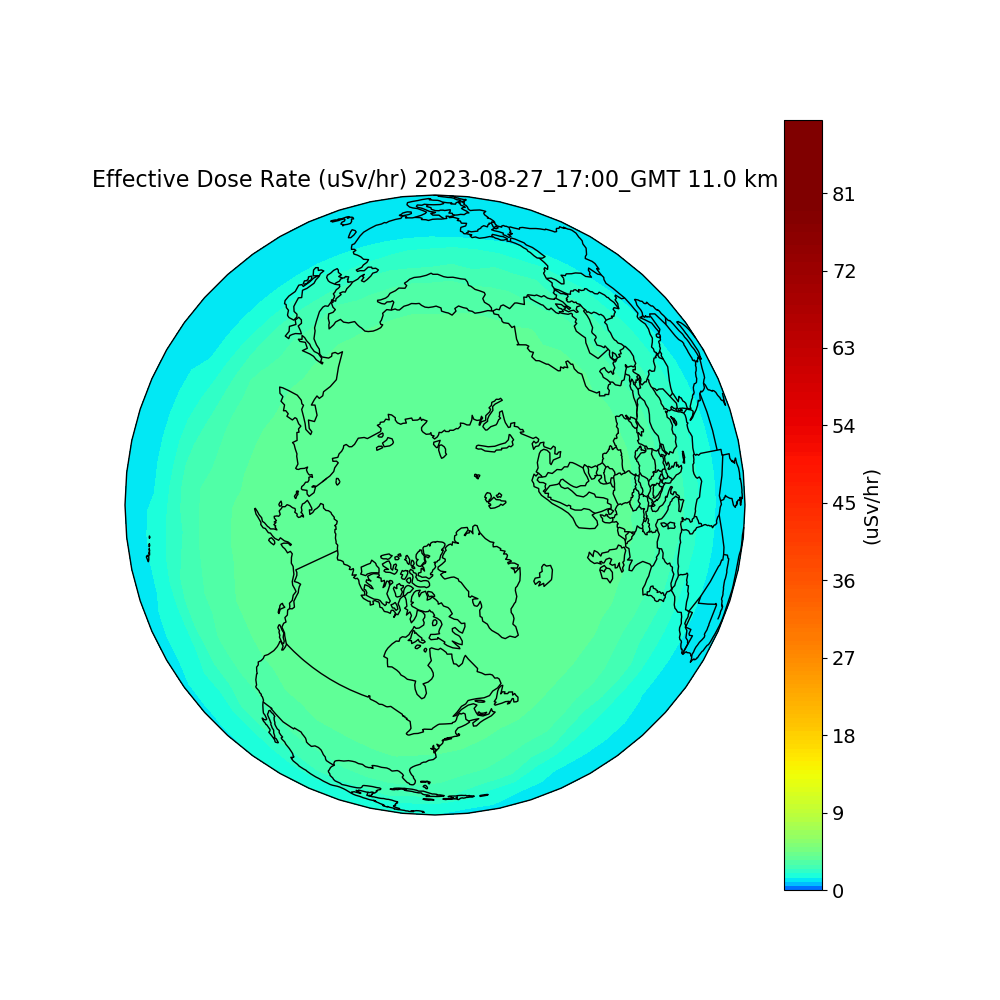 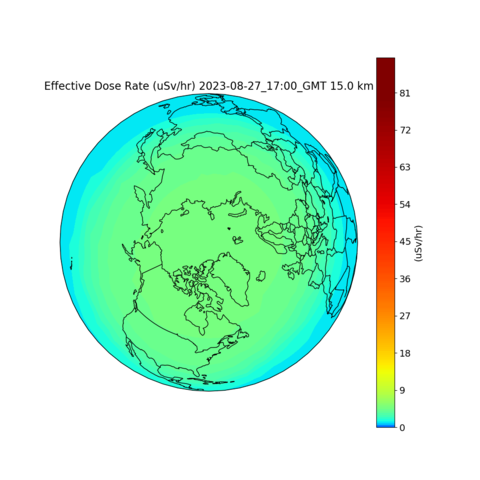 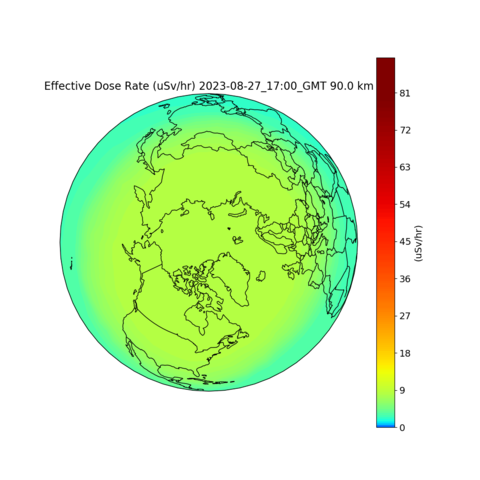 The Nowcast of Atmospheric Ionizing Radiation for Aviation Safety (NAIRAS) model is a prototype operational model currently under development at NASA Langley Research Center. The NAIRAS model provides global, real-time, data-driven predictions of atmospheric ionizing radiation exposure for archiving and assessing the biologically harmful radiation levels at commercial airline altitudes. The sources of ionizing radiation are galactic cosmic rays (GCR) and solar energetic particle (SEP) events which can accompany disturbances on the Sun’s surface. The composition and energy spectra of atmospheric ionizing radiation originate from and are subject to variability in space weather phenomena. As such, the NAIRAS model provides a space weather decision support tool related to radiation impacts on crew and passengers of long-range aircraft, an area of national priority for NASA’s Applied Science Program.

The NAIRAS model will enhance the performance of the decision support tools provided by the NOAA Space Weather Prediction Center (SWPC), since this decision support system does not currently monitor or estimate the ionizing radiation present in the atmosphere at commercial airline altitudes. The end-user communities that will benefit from the NAIRAS model are the commercial airline industry (airline corporation and aircrew professional association), the FAA, the National Institute of Occupational Safety and Health (NIOSH), and NOAA/SWPC. Results from the NAIRAS model will provide tools for its end-user organizations to develop policy and operational procedures for mitigating biologically harmful radiation exposure and provide an aircrew career planning tool – especially during SEP events. NAIRAS results will also aid in the formulation of recommended aircrew annual and career radiation exposure limits, and will enhance epidemiological studies conducted to better understand the biological effects of atmospheric ionizing radiation on passengers and crew.

The key NAIRAS data products are global distributions of vertical profiles of radiation exposure rates, computed from the Earth’s surface to approximately 100 km in real-time. NAIRAS output will be made available at NOAA’s National Weather Service, Aviation Digital Data Service (ADDS). NOAA/ADDS is a decision support system whereby NAIRAS results can provide a tool for commercial airlines and aircrew to monitor current and accumulated radiation exposure. The long-term goal is to transition the prototype NAIRAS model into an operational system that will be adopted by NOAA/SWPC.

The development of the critical input data stream formats and I/O interface modules between the input datasets and the distributed network server database is complete. Input datasets for historical storm periods were prepared for NAIRAS verification and validation studies. A real-time prototype operational NAIRAS global GCR radiation exposure prediction has been demonstrated.

The previous dosimetric quantity computed by the NAIRAS model was the dose equivalent rate at the tissue boundary without transport through the body. This approximation overestimates the radiation exposure, and the overestimation is significant for SEP events. All ICRP radiation exposure limits are given in terms of effective dose, which is representative of the average full-body exposure. The NAIRAS model has been updated to compute effective dose rates.

Considerable effort was made in increasing the computational efficiency and assessing the accuracy of the CISM-Dartmouth geomagnetic cutoff rigidity model. The model is suitable for a real-time nowcast and integration into the NAIRAS distributed network operational architecture. 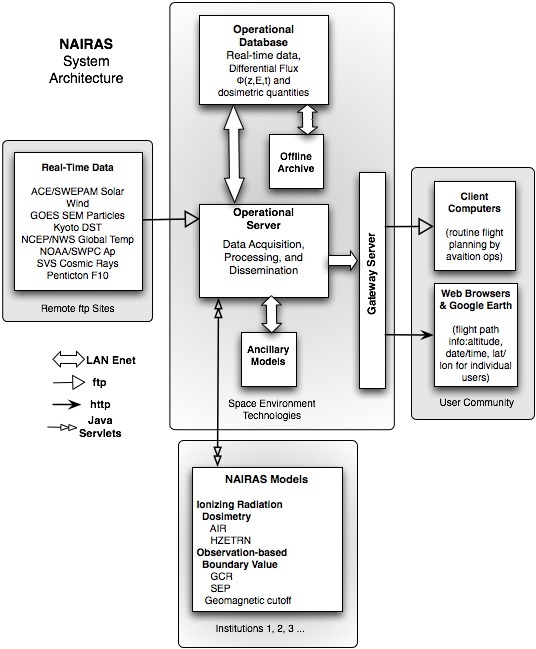 ScienceCasts: The Effects of Space Weather on Aviation 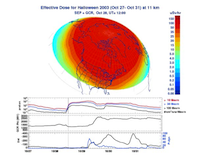